While blogging about sci-fi romance at Spacefreighters Lounge (since 2007!) and running the SFR Brigade (500 members strong!), Laurie A. Green has also been busy writing sci-fi romances of her own. In the process, she became a multiple RWA Golden Heart Award finalist for her books. While I was happy for her achievements, I'm even happier her work is now entering the sci-fi romance arena of published books!

Her debut SFR is FAREWELL ANDROMEDA. Now she's aboard The Galaxy Express with an exclusive triple cover reveal of her next three releases!

INHERIT THE STARS is the first novel in her The Inherited Stars series and will be released in three parts. The individual titles are FLIGHT, THE NETWORK, and SACRIFICE.

The first installment, FLIGHT, is scheduled to release in late February 2015, and a winter/spring 2015 release is the plan for the next two parts.

Here's the (unofficial) blurb for INHERIT THE STARS:


Hunted by the ruthless Ithian Alliance, escaped slave Sair’s one shot at freedom comes by way of Captain Drea Mennelsohn and her prototype cargo ship, Specter. Putting his future in the hands of a suspected smuggler could be the biggest mistake of his life, but Drea proves to be far more dangerous than a mere outlaw, and the mysterious skipper wants more from Sair than just his fee. Drea and her brother are leaders in a network carrying out plans to restore order to the universe. Insurrection is brewing, and Sair might be the key to their success, but his role in the coup may only come at the cost of any future with Drea.

Presenting the covers for INHERIT THE STARS: 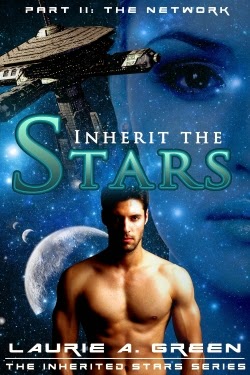 Ms. Green also provided me with an overview of The Inherited Stars series so I could share the highlights with you:

* the series explores themes of love vs. duty, the nature of fate, and the privileges and hardships surrounding inheritance

*the series will feature an overarching plot of interlocking threads

Sounds fun! Visit the links below to learn more about author Laurie A. Green!