Print Release News For R.K. Mann's THE TRADER: MAN WITH NO FACE

R.K. Mann's THE TRADER: MAN WITH NO FACE is now out in paperback (the digital edition released in March 2014, but I didn't learn about it until recently). Thought I'd alert my passengers in case any of you prefer your SFR in print! Looks like it features a hero with a major disability (more diversity in SFR, yay!). Here's the cover and blurb: 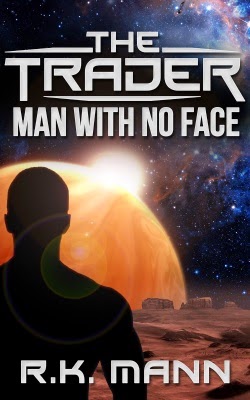 A Patusian trader on an intergalactic mission awakens to discover that his space ship is gone. His eyes and ears are missing and only gaping holes remain of his nose and mouth. In place of his normal senses he has inexplicably gained the power of telepathy, which he must harness as his only defense against the ferocious and highly evolved aliens, the drogan Kin, who hunt him for food.

Maranth, a beautiful young doctor, was briefed about the depravities of sex, violence, and intoxication before she left her cultured home planet, Veddi, to practice medicine at an off-world mine. But when Afthari raiders attack the mine and enslave her, she finds herself in a world frighteningly different from the perfect, structured society in which she was raised.

Against all odds, the trader finds his way into the Afthari raider colony and uses his telepathy to communicate with Maranth, the only kind soul he finds there. Together, they embark on a daring journey to return home. In the process, these two very different people regain what they’ve lost, and much more.

Set in a tumultuous future, The Trader: Man With No Face raises difficult questions about the nature of love, social perfection and identity.