A Selection of Suspense Sci-Fi Romances 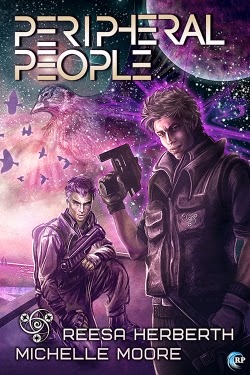 About a week ago, Laurie A. Green left a comment at TGE indicating that she wished "…more SFRs blended in elements more typically found in Romantic Suspense." Lo and behold, not too long after her comment I learned about a forthcoming title from Riptide Publishing that falls into that category. How's that for great service?!

The book is PERIPHERAL PEOPLE (May 2015) by Reesa Herberth and Michelle Moore. The novel length book (115k long!) is part of their Ylendrian Empire series.

Here's an overview of the book, courtesy of Riptide Publishing:


Peripheral People puts multiple twists on the classic police procedural, set in the vastness of an interplanetary empire and featuring a serial killer who murders victims with his mind. Four deeply flawed characters struggle to cooperate within the tight confines of an imperial enforcement spaceship while racing to solve the case. Well-timed humor helps to ease the heavy atmosphere of escalating violence, psychic traps, and the added complication of sexual tension, while the carefully crafted mystery keeps readers guessing until the end.

Corwin Menevie and Nika Santivan are decorated veterans of the Imperial Enforcement Coalition, and are perfectly capable of solving cases the old-fashioned way. When they’re paired with Westley Tavera and Gavin Hale, the most powerful Reader/Ground team to emerge from the Psionics Academy, it could either be the best thing that’s ever happened to crime fighting, or the makings of a quadruple homicide.

During a routine investigation, West’s talent puts them on the trail of a brutal serial killer who traps his prey in a deadly mental playground. Then the killer starts baiting the team, laying psychic landmines at crime scenes and exposing IEC secrets. The strain of the case binds the agents closer together—so close that Nika and Gavin start sharing a room, and even the curmudgeonly Corwin finds himself as occupied with West as he is with the murders.

But as West’s visions of death grow more violent, the only way out for all of them may be straight through the mind of a monster. If they’re not careful, they may forget which side of the hunt they’re on.


Many sci-fi romances have suspense elements, but I narrowed them down to a selection of titles that hew most closely to the suspense/police procedural genre:

Let's help Laurie find more suspense SFR titles. What other books would you add to this list?