Author Athena Grayson alerted me about her new sci-fi romance serial, HUNTRESS OF THE STAR EMPIRE. The first installment is HOT PURSUIT and features a heroine bounty hunter! Here's the cover and blurb: 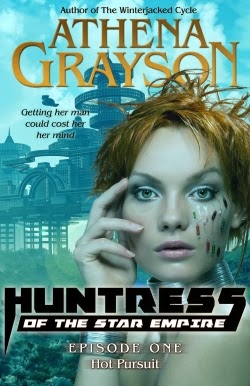 She always gets her man…

Treska Sivekka is the best Vice Hunter in the entire Union of Civilized Worlds, but her latest bounty might put her right out of a job. She’s on the hunt for the last of the psypaths, whose psionic gifts are thought to have caused devastating alien attacks on a dozen worlds. The last psypath, Micah Ariesis, is the only remaining chink in the armor of the Union.

But acquiring her target starts Treska on a journey not back to the safety of the Civilized Worlds of the Union, but its wild edges, where she begins to question all she’s known—about the attacks, about psypaths, and about herself. As she unravels the shocking mystery of her own origins, she must question everything she believes until she finally hunts down the truth.

Since the first installment is 99 cents, I listed it on my Cheap/Free ebooks to Download page.