SFR Shindig: Love and the Kick-Ass Heroine By Deborah A. Bailey

The original Star Trek was my first exposure to science fiction, and ultimately I moved on to reading and writing fan fiction. One of the best things about it was writing stories where I got to pair up various characters.

So once I started writing stories of my own, I didn’t see any issues with having a heroine who was strong, capable and unafraid to fall in love. It was logical, as Mr. Spock would say. Why would a heroine in a science fictional world be any different than her counterparts in other genres?

But at times there’s outright hostility to the idea of a strong female character having a love interest. As though if she did fall in love, she’d start sighing and draping herself across fainting couches. 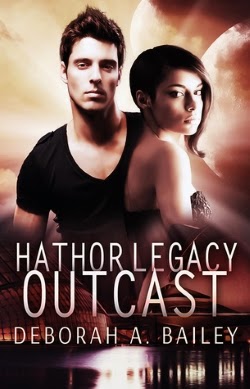 Kick-ass heroine? No problem. Kick-ass heroine in a romantic relationship? No good.
When I started to work on my Hathor Legacy books, I was determined to create a heroine who could have it all. In “Hathor Legacy: Outcast,” the first book of the series, I was still defining Nadira, the heroine. She was tough, but not world-weary. Cautious about being in a relationship, but physically attracted to Jonathan, the hero.

In book two, “Hathor Legacy: Burn,” she and Jon are a couple, connected by love and by a psychic bond. As the story unfolds, Nadira’s got a mystery to solve and a relationship to manage. Love doesn’t get in the way of her ability to handle her business. It’s not a weakness or a distraction; it’s an important part of her life.

That’s one of the reasons I decided to create a turning point for their relationship by temporarily removing Nadira’s psychic abilities. To be honest, at first I had a hard time writing about it. I was used to her being stronger and I had to be willing to let her be vulnerable.

By setting the story on another planet hundreds of years in the future, I’ve removed a lot of the norms of the society we live in. Male/female roles are not what we’re used to on Earth in the present day, and I wasn’t looking to recreate a world with the same limitations and stereotypes.

But at the same time, writing about a future world without bringing baggage from the current one isn’t easy. When I write my characters, I want to keep challenging myself (and the reader) to see the world and relationships in a different way.

Sure, the heroine can lead the charge and kick all the asses in the room, but there’s no reason why her strength has to be in conflict with her desire for love and connection. It’s what I’ve come to expect as a reader.

As a writer I’m learning how to strike the balance between strength and vulnerability and create a character who’s not afraid to be both. 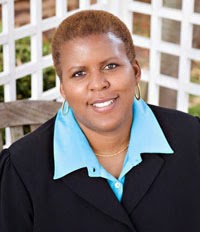 Deborah A Bailey's Science Fiction & Paranormal Romances include suspense, a bit of mystery and a lot of romantic heat.

She's the author of the Science Fiction Romance novels, "Hathor Legacy: Outcast" and "Hathor Legacy: Burn." Her short stories have won awards from the Philadelphia Writers’ Conference and have been published in US1 Magazine and the Sun. They're included in her short story collection, "Electric Dreams: Seven Futuristic Tales."

Her articles have appeared in publications including Baseline magazine, Working World Magazine, More.com and CNN.com. 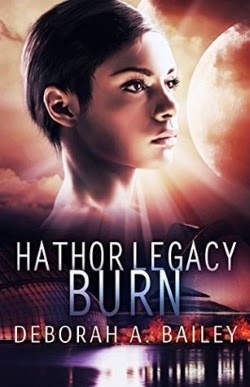 On the planet, Hathor, an old threat re-emerges that may destroy the fragile alliance between the Guardians and Novacorp. When Nadira is called to investigate a rash of fires throughout the city, she discovers the Deshtu, another group with PSI powers who have been purposely kept in the shadows.

Working to uncover the source of the fires, Nadira learns the brutal truth about the origin of the Guardians. The Guardian Elders have plans to make Nadira more powerful, and she may be forced to sever her psychic connection to Jonathan Keel.

When an unexpected ally gives Jonathan information about the Deshtu that connects them to the fires, he becomes a convenient scapegoat for the opposing factions. Nadira puts her life on the line to solve the crime, while the Elders make their move to remove Jonathan from her life forever.

As time runs out, the Guardians prepare for a clash with Novacorp that could plunge the planet into chaos, and a final betrayal forces Nadira to risk everything to save herself and Hathor.
Posted by Heather Massey at 8:00 AM
Newer Post Older Post Home