Each informational post will focus on one of the authors and will feature a cover and blurb. Social media links will be at your fingertips so you can learn more about these lovely ladies and their work. Enjoy!] 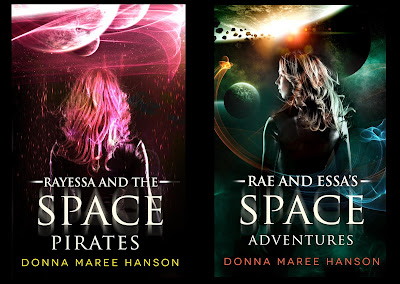 Sixteen-year-old Rae Stroder lives in a hollow asteroid, a defunct refuelling station, with a brain-damaged adult, Gris, to keep her company. Low on supplies, they’ve been eking out an existence for years. Everything changes when Alwin Anton, ultra-clean, smart and handsome AllEarth Corp company auditor, arrives to find disarray. Full of suspicion, he interrogates Rae, threatening her with prosecution for theft. He uncovers the fact that she is not Rae Stroder at all, when space pirates attack.

During the attack, Rae is taken prisoner and Alwin Anton escapes in his space ship. The pirate women prepare Rae for sale on the infamous Centauri slave markets. It's all going badly, when she is purchased by a mysterious Ridallian.

Meanwhile, the space pirates are out to kill Alwin Anton because he holds the secret to Rae’s true identity. It’s a race against time to unravel the intrigue of Rae’s past to secure her future.

Donna has been the Chair of two Australian National Science Fiction Conventions, inaugural president of the Canberra Speculative Fiction Guild and a prior treasurer of the ACT Writers Centre. In 2006, she won a Varuna Longlines fellowship for one of her novels in progress. She completed a Masters of Creative Writing at the University of Canberra in 2013 and was awarded an A. Bertram Chandler Award in 2015 for her contribution to Australian science fiction.