Speaking of fantasies, I invited the author to come aboard and blog about some of the fantasies (sexual and otherwise) readers can expect from RELEASING RAGE. Just because women authors write many sexual fantasies and many readers consume them doesn't mean we don't want to explore the "why" once in a while! Ms. Sax was game and in her post she delves into the story's worldbuilding and her take on cyborg heroes. To get you better acquainted with RELEASING RAGE, here's the cover and blurb! 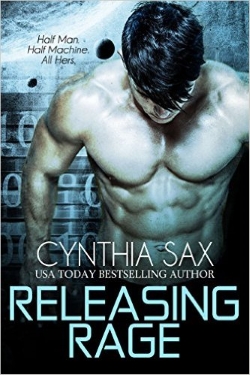 Half Man. Half Machine. All Hers.

Rage, the Humanoid Alliance’s most primitive cyborg, has two goals—kill all of the humans on his battle station and escape to the Homeland. The warrior has seen the darkness in others and in himself. He believes that’s all he’s been programmed to experience.
Until he meets Joan.

Joan, the battle station’s first female engineer, has one goal—survive long enough to help the big sexy cyborg plotting to kill her. Rage might not trust her but he wants her. She sees the passion in his eyes, the caring in his battle-worn hands, the gruff emotion in his voice.

When Joan survives the unthinkable, Rage’s priorities are tested. Is there enough room in this cyborg’s heart for both love and revenge?

Releasing Rage is a dark story. It IS a romance. It has the expected romance ending. But it is also gritty and violent, which is unusual for me, but I couldn’t write a cyborg hero any other way.

Because cyborgs are (normally) designed by humans to be super soldiers. That’s their sole purpose. They don’t have hobbies or other interests. They can’t take different roles within the organizations they serve. They’re soldiers. They battle the enemy and that’s it.

To become the heroes we SciFi romance readers want them to be, it’s necessary for cyborgs to exercise free will, to rebel against their commanding officers, to become more than mere puppets for their masters.

This means the cyborgs must overthrow their training and their programming. Their instinct-and-emotion-driven human halves have to overwhelm their logical, designed-to-be-obedient machine halves. Cyborgs must have a very strong reason to revolt.

In Rage’s case, he and his cyborg brethren are abused (in all of the ways beings can be abused) by their human masters. They’re tortured and tested and, when they become obsolete, they’re killed and replaced with newer models. After many human lifespans of this, the cyborgs have had enough suffering. They decide to escape, to flee to a planet where they’d be free of this pain.

A male who has been through such pain, such torment, is more likely to be understood and loved by a female who has been through her own trials and tribulations. Joan, the heroine of Releasing Rage, is also facing darkness and discrimination but of a different type. She’s the sole female engineer on a battle station staffed with woman-hating males.

The battle station is positioned near the front lines, far away from home planets. The Commander hates females, thinks they’re a distraction for his staff. (He’d have sympathy for Nobel laureate Tim Hunt, who recently spoke in favor of gender-segregated workplaces, stating that women in laboratories "fall in love with you and when you criticize them, they cry.")

The Commander is the sole authority for many, many miles, he has hand chosen subordinates who share his views on females, and he’ll do anything to keep his battle station female-free.

Yes, it doesn’t look good for Joan (and it does get VERY bad for her). She’s an unwilling pioneer (someone has to be first) and I’m certain, if she had anywhere else to go, she’d fantasize about leaving, about escaping.

I think we can all relate to this in some way. We’ve all been in situations we don’t want to be in. We fantasize about walking away, about hopping on the next spaceship headed anywhere. Maybe we’d prefer to be rescued, to have a hunky alien zoom down and take us to a planet far, far away.

With delicious SciFi stories, we can do this. We can escape the harsh reality for a few moments, get away from our problems. We can also see our heroes or heroines triumph against their darkness and this can inspire us to continue our own good fight.

Have you read a dark SciFi story recently? I’d love to hear about it, about why you chose to read a bit darker.

She lives in a world filled with magic and romance. Although her heroes may not always say, “I love you,” they will do anything for the women they adore. They live passionately. They play hard. They love the same women forever.

Cynthia has loved the same wonderful man forever. Her supportive hubby offers himself up to the joys and pains of research, while they travel the world together, meeting fascinating people and finding inspiration in exotic places such as Istanbul, Bali, and Chicago.

Sign up for her dirty-joke-filled release day newsletter and visit her on the web at www.CynthiaSax.com