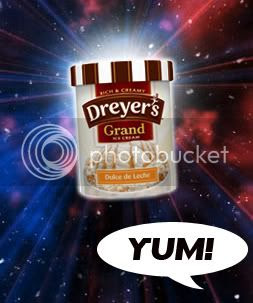 I think it’s safe to assume we’ve all had this experience: You enter a store with the intent to purchase one item. Just one. In fact, you’re so dead sure that you don’t even grab a basket or cart.

Maybe you only need a bottle of shampoo, a box of diapers, or a gallon of milk. Or maybe your mission is something more sublime, like a midnight run for a container of Dreyer’s Dulce de Leche.

But despite your best intentions of grabbing one--and only one--item, you invariably find yourself walking out with two or three (if not four or five) different items.

Science fiction romance is like that sometimes. You buy or borrow a book thinking it’s going to be straight SF, but then the story surprises with the appearance of a romantic subplot or thread. Or, maybe you knew the romance was there to begin with but its presence is much stronger than suspected.

Of course, we’re discussing books released by SF imprints here--not romance publishers. (I think it's safe to say that someone’s in trouble if they release a book with an undercover romance!)

Often, neither the cover, spine, or jacket copy give the romance in these books away—which means that we’re sliding into romantic SF territory. But sometimes the “elements” are surprisingly robust.

Word of mouth is often the main sleuthing strategy we must rely upon to discover them. Recently, there was a discussion at Kimber An’s latest Romancing The Blog post. A commenter posted that she thought she was buying straight SF but ended up with “Romance instead.” She also noted that, “The people who’d like to read them will pass them by...”.

Are we chickens, that we must hunt and peck for these books?

Again I jest, but there was a time when romance in SF books was strictly verboten with some publishers—and not that long ago, either. I’ve heard that the penalty for attempting to include a romantic subplot could be pretty severe.

Whether SF publishers forbade authors to include romantic elements in order to preserve genre “purity” or because of prejudice against romance stories, I don’t know. Whatever the reasons, I’m sure they’re complex. Makes me wonder, though: Without that ordinance, would there have been more romantic SF/SFR on the shelves over the past twenty years? We’ll never know, of course, but hats off to the authors who fought for that creative right.

The following books (with the exception of the Sharon Shinn selection) are those I read and either didn’t anticipate the romance/romantic elements, or didn’t anticipate it’d be so prominent. Most definitely do not fall in the category of a traditional romance, so buyer be warned if that's all you're seeking. But even if much less screen time is given to the romance, many of the elements are there:

The above list is just my personal sample of science fiction romance undercover books—I’d love to hear about yours. (And don’t forget to bring the ice cream; we'll be passing by a particularly warm supernova next!)