Honestly, what woman doesn’t crave a life of danger, facing off with destiny aboard a too-cool-for-skool space junk?

I’ve blogged about space pirate heroines previously, but figured I’d have to wait until Susan Grant’s next book to get my fix. Well, thank goodness for vigilant authors! Karin Shah alerted me about her recent debut science fiction romance STARJACKED (Samhain Publishing). Otherwise, I might have been floundering in space pirate heroine purgatory for a lot longer.

How lucky can a girl get? I ask for a story about such a character and Karin Shah delivered! Coincidence? Sure, just keep telling yourself that. ;-)

On a more serious note, space pirating is a very deadly business. I’m thrilled when I encounter stories that make an effort to portray these characters with at least a modicum of realism, because it’d be so easy to cross the line into swashbuckling superficiality. The more tortured they are, the better, and tortured is space pirate Tia Sen’s middle name.


Check out the blurb of STARJACKED from the author’s Web site: 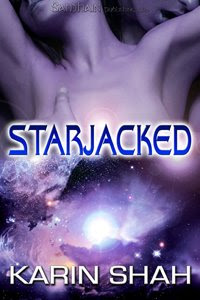 In the lawless fringes of deep space, pirate Tia Sen inspires both respect and fear. She has a rep for being hard as plascrete, tough as Amalan leather, and as strong as she is beautiful, but she has a secret. For years she has courted death, freeing children captured during raids. When she rescues a brave mechanic from a nearly fatal beating, she risks more than just her heart.

Emotionally scarred by the murders of his wife and unborn child, Rork Al’Ren wants nothing more than to eradicate every bit of pirate scum in the galaxy. But when his undercover mission goes sour, he finds himself Tia’s personal slave and falling in love with the very person he’s sworn to destroy.

But Rork doesn’t have the luxury of love, a powerful new weapon threatens the stability of the universe and if he can’t convince Tia to surrender it, the Union of Planets will be overwhelmed and war will rock the galaxy.

After reading STARJACKED, I had the pleasure of interviewing Karin Shah about her book. Her efforts to place this tale into your virtual hands is very inspiring—and she also weighs in on the all important debate over Hooks vs. Eyepatches!

The Galaxy Express: How did STARJACKED evolve?

Karin Shah: Starjacked is the sequel to my first ever completed manuscript which I now call STARSTRUCK, but was once upon a time called, NOT WORDS ALONE. (What can I say? I started reading romance in the eighties.) Rork had a small, but pivotal appearance in STARSTRUCK. He was all the things I like in a hero, emotionally wounded, tough, in control, and completely alone. I fell in love with him and wanted to write his story.

TGE: Female space pirates in science fiction romance are rare. What inspired you to create Tia Sen, as opposed to the typical route of making the hero a pirate?

KS: Since STARJACKED (at that time BY LOVE TRANSFORMED—eighties remember) was Rork’s story and I knew he hated pirates, what could be more cruel than to make him the personal slave of a beautiful pirate? (I love him, but we always hurt the ones we love, especially if “we” want to write a good story.