Blood at the RWA Conference

Stop the presses! Grab your Jimmy Olsen signal watches! I interrupt this blog to bring you a newsflash. 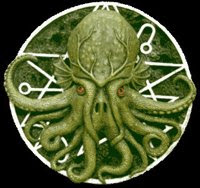 Agent Z here at the Romance Writers of America’s annual conference, and folks–it’s pandemonium. Barely five minutes ago, strange pods of unearthly origin crashed through the roof and a multitude of tentacles sprang forth!

Being Agent Z, Inter-Galactic Spy, I of course remembered to bring my Gamera mask, so I think the pods believe me to be a friend of children everywhere. Whew!

These tentacles are lashing out at everyone, having some kind of disinhibiting effect on the romance writers. Usually a group of anti-social hermit types spending most of their waking hours on their computer keyboards, these scribes are now throwing caution to the wind and engaging in the roughest kind of fisticuffs.

Whoa! I almost got hit by a champagne bottle. Who would have thought that a seventy-year-old Harlequin Presents author had it in her? They’re acting all kinds of crazy opposites. Ohmigod! I think I just spied Jude Deveraux with a goatee. (Oddly enough, it doesn’t look bad.) 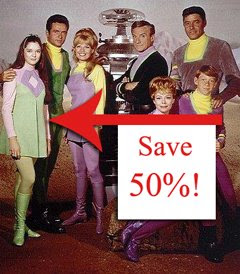 Oh, no! Now they’ve noticed my fashionable pastel polyester-and-velour ensemble a la Penny Robinson! No doubt they share—and quietly admire—my sartorial shopping skills. (I picked up quite a few pointers while on planet Gor.)

I’m just gonna get myself to a safer place before I suffer an injury. Geez. Would you look at that? I’ve got red on me! Sod it.

Now what? Hmmm, by the look of things, they’re forming into two distinct factions. I can’t quite figure it out.... Blimey! It’s E-Pubbed Versus Print-Pubbed. The recent Internet shenanigans have spilled over to the conference. This is terrible! This is awful! It’s matter meets antimatter! KITT meets KARR!

Ladies and gentlemen, this is truly a remarkable sight! While clutching broken bottles, razor blades and many cans of hairspray, they are advancing upon each other. There will be blood on the romance conference floor tonight, folks. What will the readers think? Will their favorite writers survive? Will they get autographs in time to eBay ‘em for premium prices? It's MORTALLLL KOMBATTTTT!!!!!!

There’s a huge stand-off going on. Dayum, I never thought a bunch of smut writers could look so tough. It’s a veritable miasma of blood, guts, and mascara. Ahhhhhh!

But here comes a gang of the perennially unpubbed. What will they do? They hold the balance of power – there’s so dang many of them! Oh look–they’re lining up behind Nora Roberts! (How predictable.)

Something’s got to give. This is so painful to watch. I can’t look. Oh, crumbs. In shielding my eyes, I’ve cracked my Gamera mask. They’re onto me and my Official Phantom Empire chums (Oscar & Pete) can’t be reached!! (Now who will press my britches?)

Wait, I know! Modern technology shall be my savior.

I’ll just whip out my handy Disintegrating Atom Smasher Machine iReaderSwindle 9000 (available in five fanciful colors) and find that ebook I’ve been meaning to get around to: HOW TO SURVIVE THE COMING ZOMBIE-POD TENTACLE APOCALYPSE. That’s gotta be helpful, right?

Crapper Snacks! That crazed crowd is inching closer. C’mon, c’mon, where is that file?

Aha! There it is.

Now I’ll just…. Oh, no. It can’t be. The stupid ebook file is locked by DRM! Great. According to its properties, the ebook will only open on an iReaderSwindle 8995 ver. 2 that was manufactured between the dates of January 17 – 20, and sold to a guy named Fred who drives a 1978 Dodge Colt with a lazy Calico cat named Sebastian.

What’s that? A call on my handy utility com? It had better not be those guys selling starship warranty extensions again! 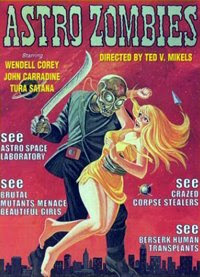 Well, some pod things landed and now everyone’s acting like some crazed Astro Zombie! And worst, even as I speak, they’re heading right toward me. I think they can tell I’m not one of them because my mouth isn’t dripping saliva at the sight of the after-hours bar.

I might…just might…be able to survive if I can get this ebook I bought to open. But it’s locked in this stupid DRM. Here, I’ll send you the requirements to open it.

How did you find that out?

****skizzz**** Unbeknownst to the public, there’s a GPS tracker built into each one.

****skizzz**** Sure does, but it’s very convenient for this post, isn’t it? It’s called the Deus Sex Machina SFR Chip, or just “Scrappy Doo” for short.

Well, I’ll be damned. Lemme look around and grab it then. The zomboids are so close now, I can smell their mini-bar breath!

Let’s see, let’s see….here it is, right under this pile of man-titty swag! An iReaderSwindle 8995 ver. 2. Check. Manufactured between the dates of January 17 – 20. Check. Once owned by a guy named Fred. Let’s see…initial’s here are “F. Flintstone.” Okay, check. Turning it on….there’s a pic of his 1978 Dodge Colt. Check. And what’s this? A photo of a Calico cat sleeping? Double check! At last! I’m saved. Now I can open the file and discover how to escape! Yippeeeee!!

Uh! Waitaminute. It’s not opening…?? What’s this pop-up say? “Sorry. This DRM file won’t work with this unit. Your lazy Calico cat isn’t named 'Sebastian'”? What???? His name is FRANK? You mean I can’t open the file I bought and paid for because of that???