George Mann’s THE AFFINITY BRIDGE: A Steampunk Reincarnation of THE X-FILES? 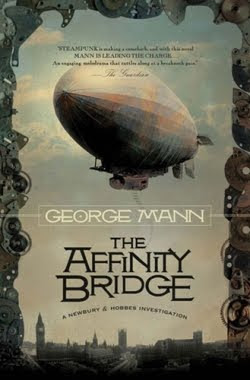 For the past year or so, it seemed I couldn’t visit John DeNardo’s SFSignal without encountering a post about or related to THE AFFINITY BRIDGE, a newish steampunk mystery series by George Mann. Given that the book was a) steampunk and b) John seemed especially obsessed enthused about this series, I figured I really better read this book and see what all his the fuss was about.

THE AFFINITY BRIDGE kicks off “An ongoing series of steampunk mystery novels featuring the adventures of Sir Maurice Newbury, gentleman investigator for the crown, and his feisty assistant Miss Veronica Hobbes.”

I must say, John was on to something because this steampunk tale kicks some serious brass ass. It’s pure, unadulterated steampunk, but it’s also enormously entertaining. Lots of intrigue, action, and adventure. The steampunk elements are accessible for readers new to the genre, and the themes are meaningful yet not mind-bogglingly dense.

Now, THE AFFINITY BRIDGE isn’t science fiction romance. However, I wanted to bring this series to your attention because the author does introduce a very definite attraction between Newbury and Hobbes, one that’s evident from their first meeting. Hence, the title of this post: I do declare that THE AFFINITY BRIDGE is a steampunk version of THE X-FILES, and power to it for that very reason! I really hope Newbury and Hobbes fire up the sexual tension a la Mulder and Scully.

The two series are wildly different, yet the commonalities I detected had me in constant squee mode since I still miss the THE X-FILES “experience.” THE AFFINITY BRIDGE is a classic example of how an idea can be reinvented in a totally fresh way. Like THE X-FILES, the story begins at the beginning of a case and Newbury and Hobbes are brought together for the first time. I won’t go into spoilers, but the usual suspects abound such as the shadowy government conspiracies, paranormal/speculative phenomena, and of course, the promise of a romance.

And if someone were to make a film or television series about the adventures of Newbury and Hobbes OMG OMG PLEASE MAKE IT HAPPEN BECAUSE OMG I WOULD BE ITS BIGGEST FAN!

(I know what you’re saying, John—now who’s the one obsessed?!)

Anyway, if you’d like to learn more about THE AFFINITY BRIDGE, here’s the complete premise:

Welcome to the bizarre and dangerous world of Victorian London, a city teetering on the edge of revolution. Its people are ushering in a new era of technology, dazzled each day by unfamiliar inventions. Airships soar in the skies over the city, whilst ground trains rumble through the streets. Clockwork automatons are programmed to carry out menial tasks in teh offices of lawyers, policemen and journalists.

But beneath this shiny veneer of progress lurks a sinister side. Queen Victoria is kept alive by a primitive life-support system while her agents Sir Maurice Newbury and his delectable assistant, Miss Veronica Hobbes, do battle with enemies of the crown, both physical and supernatural. Newbury and Hobbes are called in to investigate the wreckage of a crashed airship and its missing automaton pilot, whilst attempting to solve a string of strangulations attributed to a mysterious glowing policeman and dealing with a zombie plague that is ravaging the slums of the capital.

There's a good review of the book at SF Reviews. You can also check out George Mann’s free, downloadable Newbury & Hobbes short stories. And here’s information on the author’s next steampunk release, GHOSTS OF MANHATTAN (May 2010). 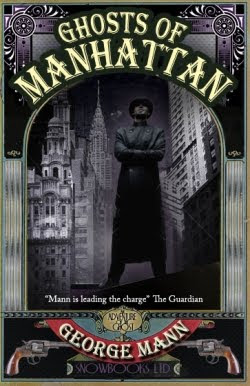 Have you read THE AFFINITY BRIDGE? Even if you hadn’t read it, would you want to see a steampunk version of THE X-FILES on television or in film?