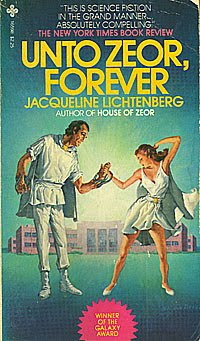 What follows is a very, very brief history of science fiction romance. Think of it as the proverbial quickie, because it’s also doing double duty as a precursor for my next post.

A good subtitle for this piece would be “The Jacqueline Lichtenberg Project” because her extensive experience and input made this overview possible. Most of what I’m presenting is based on either quotes from her online observations or paraphrased information that she provided me via email.

In other words, science fiction is born. During that time, any romantic SF stories were known as “Neck up SF” since the romance element tended to offend the sensibilities of adolescent males.

Flash forward to the 1960s, during which time Marion Zimmer Bradley’s short story CENTAURUS CHANGELING (1954) “was widely credited with changing the direction of SF with its mix of a character and later relationship driven plot.”

Then, “The culture of the world changed through the 60's and 70's - anti-war, women's movement, civil rights.”

Simultaneously, it was assumed men weren’t into exploring relationship dynamics or experiencing feelings and so they wouldn’t be interested in romance (they were too stoopid, you see).

“In the 1960's came STAR TREK - presenting a view of 1930's SF to the 1960's audience. But the women went into Spock Shock and generated fiction fanzines (an innovation).” (For more information from a fan fiction insider’s perspective, read An Interview With Joan Marie Verba (Part One)). 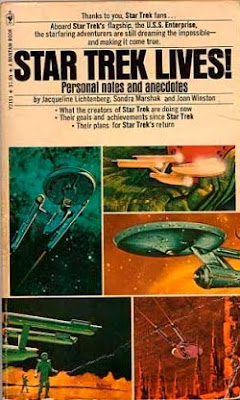 The earliest known SFR emerged in a Star Trek romance episodic novel by Barbara Sharon Emily (you can read it for free at Jacqueline Lichtenberg’s site). The significance of this type of fan fiction is that

The women who wrote TV pastiche wanted SF-Romance, and wouldn't let the traditional publishers deny it to them. They wrote it themselves.

At that time, you could not sell (professionally) any original SF or Fantasy that had even ONE sex scene in it. Fanzine markets grew explosively after STAR TREK LIVES! was published by Bantam. Then you could have go-to-black sex scenes in prof SF/F novels….”

Culturally, “The 1960's were the years the boomers tried to break out of sexual mores and strictures. The 1970's were the years women of that generation pulled the veil off secret discrimination against women.”

Enter Jacqueline Lichtenberg: her first Sime~Gen story, Operation High Time, was published in 1969 (the link will take you to the story, available for free. For a complete list of her work, visit the author’s bibliography). This was followed by her books STAR TREK LIVES!, HOUSE OF ZEOR, and UNTO ZEOR, FOREVER.

(And fans of UNTO ZEOR, FOREVER have long memories. Check out a recent post by Rachel at LoveCats DownUnder. This blogger read the book as a teen, “obsessed” over it, and is now seeking other SFR/fantasy romance book recommendations!)

Marion Zimmer Bradley’s CENTAURUS CHANGELING, and the work of authors such as Jacqueline Lichtenberg (note that Ms. Lichtenberg was heavily involved in fan fiction groups) launched a trend of SF/F stories that are “powered by a RELATIONSHIP story dynamic.” Yet it wasn’t until after 1986 that “…you could have chaste, non-anatomical-language sex scenes in prof SF/F novels.” But nowadays, “SF without sex isn't selling so well.”

On a related note, in Could romance be the Captain Kirk of literature? Blogger Bev points out that like Kirk, romance readers don’t like to lose their happy endings:

So, when people tell us that stories with those unhappy endings are more “realistic” and we should appreciate and learn from them, we instead think “rewrite”.

A prime example is Jacqueline Lichtenberg’s DUSHAU, which won the first Romantic Times Award for an SF novel in 1985. Both the book, as well as the vast numbers of fan fiction stories before it, demonstrated that readers wanted science fiction romance.

Did they get what they asked for?

More on that next time.