An Interview With Angelia Sparrow

One aspect I love about our journey aboard this galactic locomotive is finding the cosmic windfalls. Science fiction romance encompasses a wide range of stories in both the realm of print and the digital frontier. Added together, there are sometimes more choices than we realize.

This is certainly the case with author Angelia Sparrow, who is

a librarian-turned-truck-driver who has been writing off and on for over thirty years. She got her first professional break in 2004, with Torquere Press. When not perpetrating romance, she lives quietly with her husband, four kids and two cats.

I’d known about her for some time, but further research revealed that she’s penned quite a number of SFR stories. Therefore, I didn’t hesitate a second more in bringing this prolific author to your attention.

Herewith, an interview with Angelia Sparrow:

The Galaxy Express: You’re known for your “primarily spicy GBLT romance” stories, which you’ve been publishing since 2004. Please tell us about the first story you sold, and that initial path to publication. 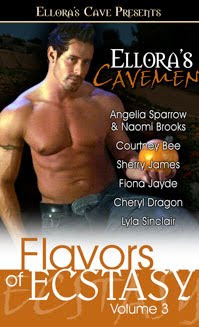 Angelia Sparrow: The first story I sold was “Prey” which is an urban fantasy Boy-Meets-Incubus piece. It's set in Memphis and was inspired by this decaying hospital I drove past every day on my way to work. I was (and still am) on Live Journal, and mostly had fannish friends. Someone I knew from a mailing list put out a call for GLBT monster stories. So I banged out this little piece, centered on the place that had been haunting me. They took it. And the next story and the next, and, and, and...here I am, six years later with eight novels and more than fifty short stories.

While Monsters is long out of circulation, “Prey” can still be found in my collection, Howl at the Mistletoe. That's a pretty good collection: gay Christmas werewolves, three zombie pieces (including a steampunk one with lesbians), several contemporaries and paranormals.

TGE: Have you noticed any changes in publishing/digital publishing since that time?

AS: There are a lot more small publishers. They come and go. Many houses have gotten big enough to go from flat fees to royalties on their short stories. There has been a big cutback in the number of e-books going to print. The big New York houses are getting in on the digital action, and seriously cutting the royalty rates. Small press pays 35-40% royalties. NY doesn't. I see more reading on devices, usually iphones, but sometimes Kindles.

TGE: You incorporate many science fictional elements and settings into your stories. Which elements/settings are your particular favorites, and why?

AS: I love a good dystopia. I blame being introduced to Orwell and Huxley at the impressionable age of 13. I like working with the idea that the future will be better in some ways and a lot worse in others. I really like taking current trends and extrapolating, sometimes to reductio ad absurdum levels. The Disunited States books (Nikolai, Niko-Chan & Glad Hands) are based on current stressors and movements in our own society. We spend a good deal of time in the Confederated States, which is based on the Christian Exodus movement, Dominion and Serpent Seed theology, Christian Identity movement and a lot of libertarianism thrown into the mix. Heartland is based on growing up in small-town middle America and the way the surface was more important than the truth.

TGE: Please recommend three of your SFR books for readers new to your work. AS: For readers who like a heroine in their reading, let me suggest “Cherry Tart.” It's Gaslight Romance, that is fluffy steampunk. Disgraced Chastity Millwood has been sent off to the Io colony with her auntie in the year 1897. Aunt is to be the schoolmistress in New Abilene and she plans to marry Chastity off to whoever she can find as fast as she can. Chastity is sulky and naughty and generally not agreeable to the plan, so she finds her own husband, handsome junior officer Ulysses Carter.

If this was a movie, it would be a big 1940s technicolor piece from Warner Brothers, starring Errol Flynn, Olivia DeHavilland, Rosalind Russell and Patric Knowles. It's really a stagecoach romance set in space.

If you prefer a futuristic romance with heavy dystopia, Glad Hands is a good one. Chuck Hummingbird lives in Pacifica and runs Bering Strait petroleum into the Tribal Lands. In order to keep his cushy run, he has to go to Blytheville AR, just over the CS border, for a special load. On the way, he picks up a hitchhiker named Seven, who is a non-person in his home country of Heartland. Things go from bad to worse in this road-trip across the Disunited States.

And this really is a road picture. It travels from Seattle WA to Birmingham AL to Gary IN. A lot of the stuff is based not only on trucking as it exists now, but on conversations with truckers across the country as to where they see the job going. 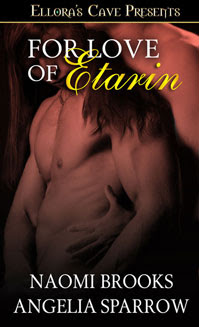 “For Love of Etarin” is one of the first stories I did with Naomi Brooks. We still love it, even as we call it Star Wars meets The Persian Boy. Ruvane Delkroy is a lonely man with a busy life and a fast ship. He falls hard for one of his employer's house-slaves, a pretty eunuch dancer called Etarin. He buys the young man, a bit informally, and adventures ensue.

AS: Thomas used to think he was the face-hugger alien and my kids (then aged 1 and 3) were his prey.

Thomas hunted a lot in his youth. One Easter Sunday, we woke to a commotion as he dragged in a struggling dove. We joked it was a bad omen that our cat killed the dove of peace on Easter.

Both of them are rescues. Thomas came to us by way of a little girl in my oldest daughter's class. Tribble came to us from the same daughter's psycho-ex-girlfriend.

AS: Oh goodness. I don't watch TV anymore. Smallville had several lovely romances going: Clark/Lex, the Jonathan/Martha/Lionel triangle. I'm oddly amused by the trivia that the actor, John Glover, is a Lionel/Martha shipper as well.

My all-time favorite SFR book is Julian May's Pilocene saga. There are several romances, healthy and not, hopeful and doomed, running through the series. You have elderly folks in love, you have a psychopath falling for a nun, and a grand doomed love triangle.

The Fifth Element is one of my favorite SF Romances. They're so cute as they fall in love and save reality.

Oddly, the Han/Leia romance in the Star Wars movies skeeves me. I rewatched it a couple years ago and was horrified by the way he used his physical size to trap and intimidate her, by the underlying hostility of all their interactions.

Time After Time, on the other hand is very sweet. For those who don't remember, that's a tale of H.G. Wells pursuing Jack the Ripper into 1979 via his time machine. Malcolm MacDowell and David Warner are completely brilliant. And Mary Steenburgen turns in a great performance as a thoroughly modern woman who has to educate her Victorian gentleman.

And call me sick, but I love Ice Pirates with an unholy love. Not just the Jason/ Karina storyline, but the Maida/Killjoy that hinted at here and there. Then again, I have the biggest girlcrush ever on Anjelica Huston, and this movie is the direct cause.

AS: Most of what I have is advice I've gotten from other authors.

When you're submitting, start from the top and work your way down. Start with Tor. Start with Ellora's Cave. Start with Playboy or Asimov's or Locus. Always watch your writer's guidelines. Yes, this means you have to reformat each submission. Do it.

When writing SF in general, be aware of what is going on socially as well as technologically. Be aware of how you handle minority characters, of whether you even include them. The all-white future was passe in the 60s. Be aware of trends in religion. Do you know that in the last 10 years, the percentage of US people identifying as Christian has dropped from 85% to 75%. Do you know there are as many Neo-pagans as there are Jews in the US?

But don't disregard the tech. I was terribly embarrassed to find some of my technology ideas for seventy years in the future were already up and running. Which means they are already obsolete.

If you're writing GLBT SF, know the conventions of both types of fiction. Also, be aware of cliches. Know where the current gay rights battles stand. Know what people are advocating. In the Nikolai 'verse, same-sex couples can marry in the United States while gays are routinely stoned to death on national TV in the CS.

Ms. Sparrow, thanks for your time, and for your art!

To learn more about the author and her work, visit her Web site. You can also find her at Angel’s Place.

Here’s a boost for your TBR pile: Angelia Sparrow was kind enough to compile a list of her science fiction romance stories for my widely-read passengers:

Alive on the Inside