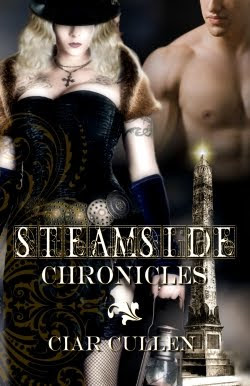 I’ve got two neat nuggets of steampunk news for you today. And let me tell you, when authors and publishers explore all sorts of ways to bring me more steampunk romance, I’m a happy camper. I love that I don’t have to be dependent solely on mainstream venues to feed my entertainment needs. It makes discovering new stories that much more special.

Ciar Cullen’s STEAMSIDE CHRONICLES is at Smashwords and on the Kindle—both at only .99 cents! On 6/13/10, the author blogged about a Smashwords coupon code that will enable readers to snatch it up for free at (if it's still good, the code is DM45Z). It's in my virtual TBR pile, so I hope to read it soon. Here’s the set up:

Emily Fenwick, former NYPD, is now reluctant defender of 1890 New York. Unfortunately for Emily, who hates "the creepy stuff," she ignored her inner voice, went to a carnival in Central Park, and entered a Victorian tent in hopes a psychic would have some encouraging news about her woefully boring love life. The guarantee she receives of meeting a tall, dark, and handsome stranger comes with a huge catch--he lives in an alternate dimension of the past.

Jack Pettigrew leads a quirky band of lost souls in a battle to save New York circa 1890. Nightmares have come alive and threaten to terrorize a fragile era. Jack leads the "punks," who have been sucked back in time through a vortex. Each has a fleeting memory of their own death--or near death--and must determine for themselves why they have been chosen for this mission. Is Steamside their Purgatory? Could an Egyptian obelisk in Central Park be the cause of the time rift, or is Emily herself to blame for the goblins, zombies, and other nightmarish scenes plaguing them?

Regarding heat level, the author stated on Amazon that “Please note that while this book has some adult content, it is not ultra steamy romance.” Ciar Cullen also writes for Samhain Publishing, so please do check out her other books if you enjoy paranormal and fantasy romance.

L&L Dreamspell has a call for submissions for its forthcoming ebook steampunk anthology. My guess is that since they will release Pauline B. Jones’ TANGLED IN TIME (December 2010), they might be interested in receiving steampunk romance submissions for the anthology.

The publisher is seeking short stories from 3000 to 6000 words in length. To learn more, read the submission guidelines. (Thanks to Pauline B. Jones for the link!)