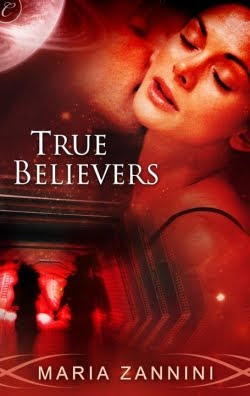 Maria Zannini's latest release is a science fiction romance called TRUE BELIEVERS (Carina Press). Seems like we’re discussing a new SFR release just about every week these days. Thrilling, to say the least, especially since many of them are ebooks.

Anyway, Maria Zannini is one author who has been waiting, writing, and waiting, and writing some more in anticipation of a good market for science fiction romance. What an exciting time for her—and readers who need more stories to glom. Here’s the premise of TRUE BELIEVERS:

Mix one cynical immortal and one true believer and throw them into the biggest alien-hunt the world has never known. Rachel Cruz is a Nephilim masquerading as an archeologist and she's stuck with an alien who believes she can lead him to his ancestral gods. Black Ops wants to find these gods too. They want them dead.

Today is the release day for TRUE BELIEVERS. I had the opportunity to interview Maria Zannini about her latest book. Her answers are chock full of fun stuff. This includes a contest news for readers as well as an excerpt, so away we go!

The Galaxy Express: On your site, you share that you “write spicy Science Fiction and Fantasy that titillate some and torment others.” What compelled you to mix science fiction and fantasy with romance at a time such blends are so niche?

Maria Zannini: I write what I like to read. I want my science to make sense, the fantasy to be magical, and the romance to be spicy.

TGE: Please tell us all the juicy details of your sale to Carina Press, TRUE BELIEVERS.

MZ: After I had finished True Believers, I sent out half-hearted queries. Half-hearted because I knew I had committed the mortal sin of science fiction. I let my hero and heroine fall in love.

Several agents were interested, and one even offered representation if I added a battle scene and toned down the romance. Around that same time, I had back-to-back eye surgeries that kept me blind and off my computer for weeks at a time. By the time I was whole again and contacted the agent agreeing to her terms, she had left the business.

I trunked True Believers, thinking no one would ever want a science fiction story with a lusty heroine, an immortal who didn’t live by human mores. I didn't think about the story again until Angela James burst out on the scene at Carina Press. It didn't take a Mack truck to hit me to realize this was where True Believers belonged.

Probably the funniest part of this story was that my editor asked for more romance—not less. I was happy to oblige.

TGE: What type of setting and characters can readers expect from the story?

MZ: What is space opera if you can't glimpse inside a starship? But this story also takes you to the high desert, a military complex hidden deep in a lake, and even inside the hard drive of a sentient computer.

Taelen Jessit doesn't want to own up to a forced vocation, not if it means being neutered for his trouble. And Rachel can't let her guard down. Not ever. The last time she did, she killed someone accidentally.

In the mean time, the government is plotting the genocide of an entire species and the AIs have evolved beyond the scope of human programming.

Everyone in this story is going for broke because it's all or nothing when there's so much at stake.

MZ: Here's a scene where the main character, Rachel, is meeting her father at an archeological dig site where she's working. Rachel's father is none other than the legendary Gilgamesh, formerly of Sumer.
***

Rachel jumped off the dark and sullied surface of the altar. Gilgamesh's baptisms had a tendency to end in blood.

Gilgamesh kissed her on either cheek, then pulled her floppy hat off her head. “Can't a father see his daughter for no reason at all? I thought you'd be pleased with this find. I was being helpful.”

Rachel rolled her head back already wishing this visit was over. “Oh, please. You do nothing if it doesn't help you first. Why did you bring me here?”

He grinned at her, amused with her response. “You are direct. You get that from me.” He handed the hat back to her. “You didn't return my calls when you were in Prague or Israel.”

“Too busy for your father?”

“If you wanted to see me all you had to do was show up.” She shook her hat at him with a scold. “At Prague you disrupted the entire assembly with that game of musical lights. And in Israel, you scared the poor curator into cardiac arrest. There was no reason to set off every alarm in a five-block radius.”

Gilgamesh chortled, his eyes sparkling with mischief. “You have to admit, that was very funny.”

“Apa! Israel thought it was a terrorist act. They put the entire country into lockdown!”

“That's what made it funny.” He huffed at her. “You have no sense of humor. You get that from your mother.”
***

TGE: What was the most challenging aspect of writing TRUE BELIEVERS? The most fun?

MZ: I loved working on the battle scenes because I spent many happy hours debating with my husband on how the scene would progress. He's a crack battle strategist and it was great fun planning an attack.

The other thing I enjoyed was the research. Everything in the book is based on actual technology. The 'com-web', the communication grid in True Believers is based on HAARP technology (High Frequency Active Auroral Research Program).

The sentient computers evolved from conversations I had with the sister of one of my best friends, a computer scientist at NASA. (She works in the private sector now.)

But the Nephilim connection came from the surprising and inexplicable lack of information. I was fascinated with these people and decided to give them a scientific explanation for their existence and apparent disappearance.

TGE: How did you become the newsletter editor for the Online Writing Workshop?

MZ: That was a case of being at the right place at the right time. Initially, they were looking for a graphic artist to spruce up the appearance of the newsletter, along with a full time editor. The publisher liked my ideas and hired me for the redesign. But it was my sparkling wit and audacity that let her try me out as an editor. (—or at least that's how I remember it. LOL.) It's been a happy marriage ever since.

TGE: What’s the most useful advice on the craft of writing that you ever heard?

MZ: Don't assume that a rejection is carved in stone. The opinion of every agent or editor is subjective. You could very well have caught them on a bad day, or it could have reached someone who simply doesn’t like certain tropes. Keep trying different people, different queries. If you continue getting the same response, find yourself a hardnosed crit partner and figure out what's keeping the manuscript from getting a contract.

Thank you, Heather for being such a gracious hostess. If I may, I'd like to pose a question to TGE readers.

How close are we to creating truly artificial intelligence? And should we embrace it or fear it?

Contest time! Every time you leave a comment, tweet or mention "Maria Zannini" anywhere with a link to my blog, your name goes in the hat for a chance to win a Texas sized prize. Go here for more information.

PS And if you're a real pal, you'll go to RT Reviews and vote for my novel, MISTRESS OF THE STONE. Go on. You know you want to. It's got pirates, and ghosts, and sexy shifters. Check out this month's excerpt and judge for yourself! 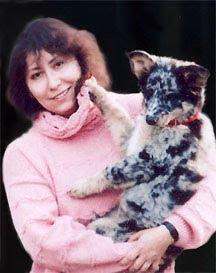 Ms. Zannini, thanks so much for your time, and for your art.

Wow, if all of that isn’t enough to make us TRUE BELIEVERS, I don’t know what is. Happy reading!