Where Is “The Mammoth Book of Sci-Fi Romance”? 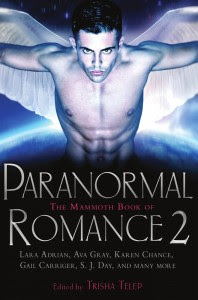 I know there are much more important things to worry about, but wahhh, where is my hypothetically titled “The Mammoth Book of Sci-Fi Romance”? I want to read it. Where can I buy it? What’s that, you say? You mean it doesn’t exist? Wahhhh!!!

…and the list goeth oneth. Then, while perusing a post at SF Signal, I just learned about a submission call for THE MAMMOTH BOOK OF STEAMPUNK.

Okay, so that steampunk one sounds fun, but after my last post, I started to wonder why no one seems to believe that science fiction romance is worthy of a spot in the Mammoth series. Yes, I know: SFR is still a niche subgenre. Books with “paranormal” in the title will automatically sell more copies. Many readers still aren’t sure if they’re ready for a combination of SF and romance. Fingers in my ears la la la.

Anthologies are a great way to sample not only the work of a variety of authors in one tidy package, but also new types of stories. Readers make an investment with minimal risk. It’d also be a chance to feature stories by both established and new authors. And if a publisher thinks there’s a market for “Special Ops Romance,” why not sci-fi romance?

Alas, perhaps it really is too soon for such a big step. I’ll concede that anthologies like the Mammoth series usually happen after a subgenre is well established. Certainly, for the sake of the authors’ livelihoods, it might be better to wait until the market is boiling than to throw the stories into a simmering pot.

But all of those obstacles, worthy opponents though they are, still ain’t gonna stop me from putting a bee in your bonnet…!

What are your thoughts? Would a “Mammoth Book of Sci-Fi Romance” be premature right now, or is it time to gather signatures for a petition?