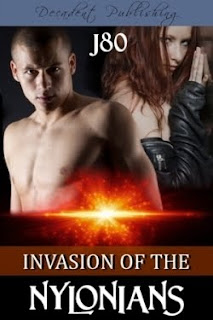 If there’s one title I’m probably going to remember forever, it’s INVASION OF THE NYLONIANS by J80.

I haven’t read it yet, but the story’s decidedly Ed Wood vibes are starting to call to me. (If J80 can do for nylons what Wood did for angora sweaters, then I think the author is onto something big).

I collect a lot of, shall we say, highly unique films for those times when I want to watch something quirky. So it’s cool to know that a story like INVASION OF THE NYLONIANS is available to me when the mood strikes.

With that in mind, I interviewed the author, who kindly played along with my irreverent questions so we could find out what makes a Nylonian tick.

Now it’s time to jump aboard a Nylonian saucer and take a tour of J80’s hosiery twist on alien invasion stories:

The Galaxy Express: First burning question: How many nylons went into the creation of this story?

J80: Depends on how you look at it. There are only 3 instances in the book of real nylons being worn. The rest of the nylons are those created by the alien’s black substance.

TGE: Why on Venus did you name it INVASION OF THE NYLONIANS?

J80: I love alien invasion films, especially ones where the aliens take over human hosts. I combined that with my love of women in nylons and decided to combine the two. The other candidates for the name of the aliens were Nyloniacs, and Hosearians. Nylonians sounded the best and that is what I stuck with.

TGE: What is a Nylonian, anyway?

J80: The Nylonians are a race of aliens who in their true form are black floating gelatin like orbs. They use special eggs to possess and take over host bodies. Their ultimate goal is to take over the galaxy one planet at a time. The invention of our nylon can be traced to a close encounter with a Nylonian Mistress Elder that happened in 1930’s.

TGE: According to Decadent Publishing’s Web site, your take is “A campy, fifties-inspired sci-fi story.” Exactly how campy, and how fifties is it

J80: I am not sure how fifties it is since the story takes place in modern times with the prologue in the 1930’s. However, it has the feel of a classic campy 50’s alien invasion story. I would rate the campy factor somewhere around Buck Rodgers or some of the films featured on the show Mystery Science Theatre. 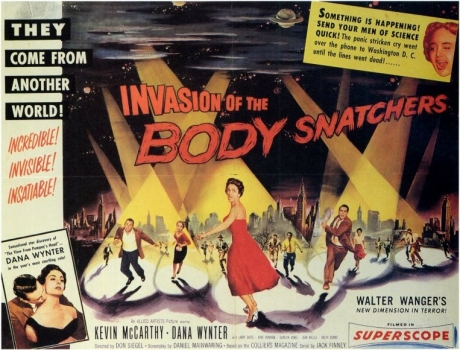 TGE: Did any films or books inspire INVASION OF THE NYLONIANS?

J80: Not really, I am a fan of films like Invasion Of The Body Snatchers and that may have played a part but what really inspired me was trying to mix my love of sci fi and women in nylons into one.

TGE: Regarding the heat level, would you characterize the love scenes as vanilla, kink, or something else?

J80: I’d have to say somewhere between kink and something else. Almost all the sex/love scenes involve the use of the nylon fetish. However, I have had some feedback from friends etc who are not into nylon but still found the scenes arousing.

TGE: Where do the alien invaders shop for their exotic leg wear?

J80: They create it themselves with a black oozy substance. For example, the substance will first mold to a woman’s lower body. Then take the form of pantyhose.

TGE: Can you share a brief excerpt, one that preferably includes the word “nylons”?

J80: Yes, the following excerpt is from chapter two on board the alien ship and includes the word nylon.

“Welcome to the Mother Ship, Julia Rainer,” a female voice said from the shadows of the dimly lit room.

Julia looked in the direction of the voice and out of nowhere came a floating black gelatin like ball. The ball took the shape of a human woman and approached Julia.

“Who or what are you?” Julia nervously asked.

“I am known as Kira,” the woman answered. “I am a Nylonian Mistress Elder. For your convenience, I will speak in the Earth language known as English. Many Earth years ago, we dropped an egg on your planet by mistake. This egg contained the essence of a Mistress Elder. We reached the Amdoli Nebula before noticing the mistake. We would have retrieved the egg right away, but for some reason we could not pick it up on our scanners. Even if the Mistress Elder had attached to a host, we should have picked her up on our scanners.”

As she struggled to break free of her bonds, Julia cried out, “How did you discover it was on Earth?”

“We searched many planets by sending one Elder down at a time. The Elder would attach to a host from the planet and convert countless of the world’s dominant species to help in the search. Finally, we reached Earth and, while going through the planet’s history, we found the article about Charles Marks. A Mistress can only attach to a female host; however, unfamiliar with humans, our sister tried to take Charles Marks and failed. Unable to live on Earth without a host, she died and the scientist created the nylon formula with her remains.”

J80, thanks for your time, and for your…nylon-inspired art. I don't think I'll ever look at nylons quite the same way again!

If you’re inclined to read INVASION OF THE NYLONIANS, one or more of the following SFR titles would make good companion pieces. All of them contain comedic elements/parody/offbeat humor:

LOVE IN SPACE (Lisa Lane)
FARTHEST SPACE: THE WRATH OF JAN (Ellen Fisher)
LUCY IN THE SKY (Barbara Elsborg)
IT HAD TO BE YUU (Ilene Kaye)