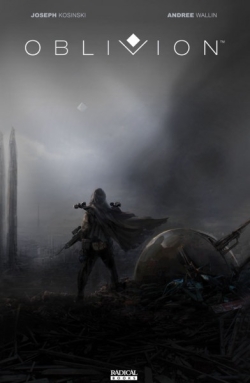 On August 3, 2010, FirstShowing featured an overview of the forthcoming OBLIVION (2012), a “futuristic science fiction love story.” After the prominent sci-fi romance elements in AVATAR and THE ADJUSTMENT BUREAU, I was intrigued by this discovery and will be keeping an eye on further developments. Here’s what they had to say about the plot:

The project was initially announced by Kosinski in late 2009 but has developed in the last year. Oblivion is science fiction story about a young "battle-damaged" scavenger on a post-apocalyptic Earth who discovers a crashed spacecraft and a beautiful woman inside. It is an original idea conceived by Kosinski and described as "a very spare science fiction film, with a small cast but big ideas and big landscapes."
…Here's a more detailed plot synopsis. Oblivion is a futuristic science fiction love story that takes place in a post-apocalyptic future where most people live above the clouds, far from the ""inhospitable place" that the surface of Earth has become. An earthbound soldier who repairs drones that patrol and destroy a savage alien race discovers a beautiful woman who crashed in a craft. They take an epic adventure that changes his world view.

Here’s another angle of the plot, courtesy of CBR:

"The main character, Jak, is an ex-soldier who works as a drone repairman on this barren planet. He fixes the drones that patrol the surface looking to destroy what's left of the Scavengers, a savage alien race. Jak has a partner, Vika, who's a by the book kind of career officer and she works as his "eye-in-the-sky," scanning for damaged drones and monitoring Scavenger activity. One day, Jak comes across a spacecraft that's crashed, and inside he finds this mysterious woman in "deltasleep." He rescues her from the Scavengers and takes her back to their Skytower, which is high above the clouds. When the woman wakes up, her story turns their lives upside down and sends each of them on an adventure of self-discovery."

Whether the romance has a happy ending remains to be seen, but since Tom Cruise is attached (not to mention the estimated one million dollar budget and possible PG-13 rating), I’m wondering if that’s code for an upbeat ending. The story itself sounds interesting enough, and the set up alone seems to set the stage for significant romance development.
However, I’m already skeptical about Tom Cruise as the hero. It’s going to take some serious acting chops on his part to make me forget he’s Tom Cruise. I would rather have an unknown or lesser known actor play the part, but what can you do? Better to have another sci-fi romance released than none at all.
Here’s a handy link to a Google search of the film for more information.
Now for film No.2: 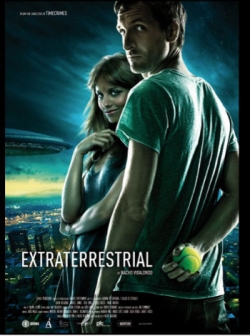 Director Nacho Vigalando’s EXTRATERRESTRIAL (2011, Spain) is being described as a “SciFi RomCom.” The plot can be boiled down to “an alien invasion love story.” Twitch recently featured the teaser poster for the film.
Here’s the set up as posted by Horror Cult Films:

“There’s only one sane response when you wake up to a sky full of alien invaders – run like hell. But what do you do if the invasion starts when you’ve just met the girl of your dreams?

Julio wakes up – horribly hungover and with no memory of the night before – next to a mindblowingly sexy girl, in a stunning apartment. She wants him to get out now but the alien invasion that’s just begun outside is the perfect excuse for Julio to stay. And even though things are growing worse by the minute, even though the girl’s husband has arrived on the scene… even though the alien threat is getting more and more terrifying, Julio’s clear about one thing. Just like the monstrous creatures that have traveled across galaxies to destroy Mankind, he’s here to stay.“

That last line is a hoot! Here are some teaser images for the film. And also these.
A trailer hasn’t been released yet, but I’ll be sure to keep you posted. EXTRATERRESTRIAL looks like a lot of fun. Now I have two dates with sci-fi romance films in the next two years. Sweet!
Joyfully yours,
Heather
Posted by Heather Massey at 8:59 PM
Newer Post Older Post Home