A Cover Success Story: THE EMPIRE by Elizabeth Lang

We have reached the final chapter of the saga that spanned the cover drama for THE EMPIRE by Elizabeth Lang.

First, there was the accurate yet technically flawed cover. Then came the author's decision to advocate for a new cover. Aided by the intrepid forces of the Galaxy Express passengers who helped the author choose from among these drafts, Elizabeth now has a shiny, brand new cover to unveil: 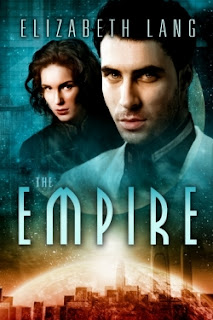 Very good, yes? If I didn't know anything else, I might have thought this was the poster to a sci-fi romance television show. The cover artist did a great job.

And courtesy of the author, here is the new story blurb:

"It will be interesting to discover which will make you beg. Will it be the pain or the pleasure?"
How do you tame a man without breaking his spirit?

The galaxy is under siege from alien invaders. The Empire is the only force that stands in their way, trading the freedom of its citizens for a tenuous security.

Amidst this chaos, Lt. Adrian Stannis is a brilliant scientist trying to stay out of the limelight. He hides on a research vessel plying the Outer Rim and finds peace of a sort with Kali Mirren, a psi-enabled humanoid. But his days of anonymity may be coming to an end. Someone has discovered his secret and is determined to make him pay for his treachery. He must finish the project he abandoned years ago, one the Council deems essential in its fight against the aliens, but things are never that simple where Adrian is concerned.

Is he more man than machine, or have years hiding behind a mountain of logic eroded his humanity? Can he survive the tangled web of political expediency and psychological manipulation that surrounds him? Will Kali be able to save him from himself, or is there a mystery surrounding him that may explode in their faces?

Everyone wants to know the truth, but will it set them free?

In conclusion, Elizabeth Lang would like to extend her thanks to everyone who provided feedback on the drafts.