An Interview With Yolanda Sfetsos, Author of ALEX WALES: PROMISE 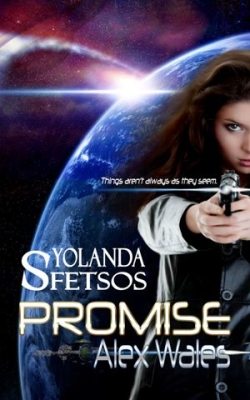 After Alex Wales crash lands on a planet that doesn't even show up on her navigational map and her ship is damaged, all she wants to do is get help and leave the planet as soon as she can. She’s got something to deliver and time is running out. Instead, she stumbles onto a very alluring man who takes her to his village—a seemingly utopian society led by a Priestess.

Stuck on this planet with no way of getting off, Alex finds herself drawn to the alluring Damon. But when locals start turning up dead after being mauled and eaten by some sort of monster, she’s thrust into the middle of the investigation.
As the layers of the mystery slowly unravel, Alex and Damon find themselves facing their pasts, and the many lies woven around the planet of Eden.

I must say, this (shortish) novel took me for a ride on the unpredictable express. I honestly could not see what was around the next bend. This is a character-driven story with lots of introspection, so we get an in-depth view of the heroine's experiences as she comes to her particular crossroad. The unpredictable parts arise from both the plot and worldbuilding. ALEX WALES: PROMISE has appeal for readers who like paranormal elements swirled into the worldbuilding. And a BEM. While not all of it worked for me, I did enjoy the fact that I was constantly surprised. I'll take that over mediocre any day.

Yolanda Sfetsos kindly agreed to an interview so I could facilitate a meet and greet here aboard The Galaxy Express. Chef has prepared a delectable array of fruit, including carambola, honeydew melon, and grilled pineapple, so dig in, sit back, and read away!

The Galaxy Express: Please tell us a little about yourself. How long have you been writing science fiction romance stories? What draws you to this subgenre?

Yolanda Sfetsos: Hi Heather, and thank you for having me here today. I love checking out your blog. :)

Well, I live in suburban Sydney, Australia with my husband, daughter, and cat. I spend as much time as I can writing—this includes brainstorming, researching, revising, and editing. I love to read. I’m also a total bibliophile.

I write in a variety of genres, but love getting lost in science fiction romance. I’ve been writing in this subgenre for several years now.

As cool as science fiction is, I find that some of the more technical stories lack the ability to really hook me in, but with this subgenre, I feel that it opens up the story to so much more. Relationship complications always suck me in, and if they’re in outer space, I’m a total sucker for it.

TGE: Your latest sci-fi romance is ALEX WALES: PROMISE. What’s it about?

YS: Alex Wales is a twenty-something, very independent space courier. She’s been out on her own for a while now, and travels from one side of the galaxy to the other in her very own ship, Promise. In-between deliveries, she likes to stop into a space station, where she hooks up with a guy called Ulric… except, when he wants more, she kinda runs.

She’s quite happy on her own, but her whole world turns upside down when she crashes into a planet that’s not supposed to exist.

This is an introduction to her world, the story of how Alex finds herself caught up in a web of lies, without intending to. It’s also about her meeting the one guy—Damon—who might (eventually) be able to change her mind about commitment…

TGE: What was the inspiration for this story?

YS: This idea came out of nowhere. It was actually a vivid vision about a woman inside her spaceship, and how she crashes into a seemingly utopian planet with a deadly secret.

At the time, my husband and I had been watching a lot of Gene Roddenberry's Andromeda, so I think it somehow wormed its way into my brain and Alex was born. I wanted to tell the story of an independent woman who could make it on her own, even if most people underestimated her. I also knew she was going to be a space courier, and wasn’t exactly lucky in love. Everything else fit together when I started writing it, though I have to admit that it was originally much shorter.

I actually rewrote it last year and it became a more involved, and much better story. It also left plenty of room for more installments about her future, which includes dealing with her past.

TGE: Is there anything in particular that ties your science fiction romance stories together (themes, settings, etc.)?

I think there are a few things that will always tie my science fiction romance stories together: the supernatural elements, and the complicated relationships. In both worlds I have magic, shifters, supernatural creatures, deadly secrets, and dark pasts. As well as heroes and heroines who are meant to be together, yet go through a lot of stuff before they get there.

TGE: How would you characterize the heat level in your stories?

YS: I don’t shy away from heat in my stories, especially the science fiction ones, but it does depend on the character/s.

For example, Alex Wales is a very sensual woman and she doesn’t shy away from sex if she’s attracted to someone. So her story finds her in several ‘heated’ situations, which will continue into the rest of the quartet.

So, you can expect the heat level to rise in my stories, but not to a too-hot level. ;)

TGE: You’ve blogged about being a fan of Thor. What are three essential things everyone should know about this classic Marvel superhero?

YS: Well, they should know that he rocks, rocks, and rocks some more! Lol, that’s three things, right?

But seriously, I’m a fan of Thor in both the Marvel universe and in Norse mythology. I even wrote a romance short story about him—called Forever Thor’s—which I offer for free.

Everyone should know that he’s the Norse god of Thunder, his hammer is called Mjolnir, and he’s one of the Avengers. How cool is that? Oh, and that Stan Lee is awesome! 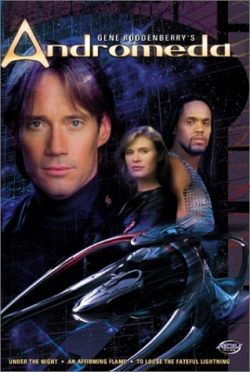 YS: I’ve always been a huge fan of the original Star Wars Trilogy, and the Space Adventure Cobra movie, and love shows like Gene Roddenberry's Andromeda, Cowboy Bebop, Trigun, Firefly, and Outlaw Star. Every single one of these movies and/or shows have inspired me in some way, and I find that if I want to get totally inspired, all I have to do is put one on and my muse starts shoving me out of my seat. ;)

I also fell in love with the book, Grimspace by Ann Aguirre and can’t wait to get stuck into the books that follow after this one. It’s just such an amazing story, and Jax is the kind of heroine that always hooks me in. Also, Touched by an Alien by Gini Koch is super cool, too.

YS: I’ve actually got a few other upcoming releases later this year:

I’m also working on a bunch of different projects—including the next Alex Wales novel, the next Recast story, and several other Sci-Fi/Futuristic tales. I’m always working on something.

I also love to get emails, so don’t be shy. You can email me anytime: yolanda@yolandasfetsos.com

Thanks Heather! This interview was a lot of fun.

Ms. Sfetsos, thanks for your time, and for your art.