The Harry Potter Phenomenon: A Lesson For Sci-Fi Romance? 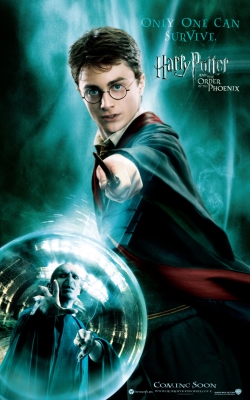 Last week, I caught up with HARRY POTTER AND THE ORDER OF THE PHOENIX (the film version, as I read the books right after they were published). My goal is to see the next two films in the series before HARRY POTTER AND THE DEATHLY HALLOWS: PART II hits theaters this summer (I know, I know, I need to get cracking).

Anyway, while watching OOTP, I attempted to analyze the elements that had gone into making Harry Potter such a popular phenomenon. It’s not like I haven’t done it before, but for some reason I started having new thoughts on the subject. It occurred to me that one of the core elements of the series’ success is that Harry Potter offers a very potent hero fantasy. In other words, Harry serves as a placeholder for the reader/viewer, and delivers the fantasy of being in a position so powerful that one can save the world.

Okay, so maybe that’s a bit obvious, but then I laid that formula (which seems to be highly appealing to mainstream audiences) over science fiction romance. Sci-fi romance is niche not only because of it’s content, but also because it has yet to tap into a particular formula, story structure, character, and/or setting that gives it more mainstream appeal. Frankly, I’m fine with the diversity, but I’m a hardcore fan. And if I want to keep reading and watching the subgenre, it needs to evolve and appeal to other consumers as well.

For example, SFR hasn’t transformed a particular character—like vampires—into something familiar yet different on a mainstream scale. Paranormal romance vampires are tame as far as traditional vampires go, but when they are placed in the context of the dangerous yet “safe” lover, they take on a whole new meaning for a whole new audience. 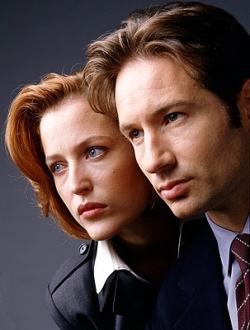 Take Mulder and Scully of THE X-FILES. Each character is unique, yet in my mind they fused to become a single protagonist. While Mulder’s quest to find his sister began as his own journey, as the series progressed it became Scully’s goal as well (expanded, of course, to include solving the mystery of the show’s main conspiracy).

While watching the THE X-FILES, I never felt as though either main character overshadowed the other. Both contributed equally using their individual talents. The show also helped make the paranormal subgenre mainstream, in large part because it brilliantly paired the “valid” and mundane element of FBI agents with exotic SF and horror concepts. If Chris Carter had made Mulder a paranormal investigator, I doubt the show would have been as nearly as successful.

So THE X-FILES is one example of how the hero fantasy can be successfully reinvented for two protagonists that share center stage—while also breaking out of its niche neighborhood.

I believe that science fiction romance has begun heading in that direction (mainly in stories with a significant external plot). However, a recent review I read made me wonder if we are still missing the boat. The reviewer discussed a recent SFR release by a well known author. The reviewer made a note that during an important scene near the end of the story, the heroine stood by, effectively powerless, and literally watched as events unfolded (presumably the hero is involved in saving the day, but the review didn’t clarify his role).

The reviewer’s interpretation of the scene in question reminded me of the placeholder heroine issue, and the idea of a placeholder heroine being a failed heroine. I was quite surprised to learn this reviewer’s take (a reviewer who regularly reviews SFR books, I should add) because it was an unfortunate reminder that the subgenre as a whole has yet to move beyond the use of placeholder characters.

The thing is, even the great Harry Potter, the character, strikes me as a placeholder protagonist--and yet J.K. Rowling’s series isn’t a failure at all. I’m thinking it’s because in that series, the fresh take on boy wizards and immersive worldbuilding help balance out Harry’s somewhat reactive role. And frankly, that approach has worked well for other successful series (need I mention TWILIGHT by name?).

That said, if anyone in SFR is going to play placeholder, then I think it should be the couple as a whole. To put it another way, how can SFR stories better achieve that balance of delivering the hero fantasy while also creating exciting, non-placeholder, non-failure characters like Mulder and Scully?

There are times when it makes sense for either the hero or heroine to be a bit more special or extraordinary than the other. Some characters just demand a lot of attention. Paranormal romance vampires did that to great success. But…sci-fi romance doesn’t have vampires. And I wonder if it follows that formula at its peril.

I do like the idea of SFR heroes and heroines sharing the responsibility of delivering the hero fantasy (e.g., first the heroine saves the hero, then the hero saves the heroine, then they both save the day working together). As I go through my TBR pile, I actually read that scenario more often than not. Yet I can also see authors strengthening and honing that approach, if for no other reason than to lend the subgenre a fundamental consistency amid all of its diversity.

Despite my big dreams for the subgenre, I don’t think it will be easy to find that combination of characters, plot, and setting to accomplish this goal in a way that will capture the attention of mainstream readers in significant numbers. Still, science fiction romance has the flexibility to give it a go—and if not toward this goal, then others.

What are your theories about the types of fantasies SFR delivers? Could certain ones be delivered more often in order to increase the subgenre's appeal?