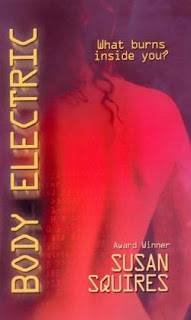 When Jo Walton wrote that “cyberpunk is over” in her Hugo Nominees: 1985 post, I was like “Hmm, I didn’t get that memo.” My guess is that she’s referring more to the cyberpunk movement, which of course began its heyday with the release of William Gibson’s NEUROMANCER.

I fall on the “evolving” side of the fence. Naturally, that brings me to cyberpunk romance, which is one of the ways cyberpunk has been evolving. Catching up with Susan Squires’ BODY ELECTRIC a year or so ago put me in the mood for more stories like that.

In addition to the SF, cyberpunk, and romance in BODY ELECTRIC, there’s a fair amount of thriller elements in the story as well. It’s a very ambitious work and I applaud Ms. Squires for tackling the issues with such intensity. I didn’t connect to the characters and romance as deeply as I wanted to, but I’m wondering if that was because the plot and worldbuilding kept my mind in overdrive. A lot of stuff happens in that book.

More recently, Sara Creasy’s SONG OF SCARABEAUS, which combines cyberpunk and biopunk, whetted my appetite even more. It’s best approached as romantic SF, but the romance has a clear arc.

When Sahara Kelly’s THE FACILITATOR came on the scene, I read that, too. This story struck me as “THE MATRIX” style cyberpunk since the characters frequently jack into a virtual reality program. It’s novella in length and goes by fast, but dips its toes into a few traditional cyberpunk themes.

We won’t have to wait long for more cyberpunk romance. Samhain Publishing has a forthcoming anthology titled CYBERSHOCK (August 2011). Here’s the lowdown: 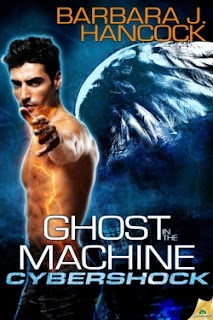 “Ghost in the Machine” by Barbara J. Hancock

Rule number one: Run from the Shadows. Unless one knows the secret that will save you.

I live in a world of waifs and shadows. Live might be an overstatement. I scrounge and scramble and survive in an atmosphere made thick and gray by the ashes of the Fallen. And sometimes I dream of sunlight. My parents were taken, even though they followed all the rules. Never scavenge at night. Never talk to Shadows. Don’t fight the Sweepers. Run. Run. Run.

Now that they’ve taken my little brother, Douglas, I’ve realized I’ve only been surviving for him. I have two choices: Follow him or lie down and die. I can’t just quit after years of struggle. I wouldn’t know how if I tried. Determination is all I have left.

And then I meet him.

He claims to be a rogue who can help me find my brother. It’s got to be a lie. But I don’t run. I stop. I listen. And I make a deal with a Shadow even though I know it will mean the death of me.

But no one ever told me what would happen if I kissed one. 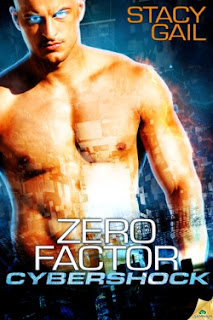 Born a psionic—a rare human prized by the government for her gifts—agridome worker Via Brede lives by two simple rules: slip into stealth mode whenever the cybernetic-enhanced militia is near. And never remove the gloves that block her psychic ability.

During a routine delivery, a tear in her glove connects her with what should be her worst nightmare. A meched-out soldier with bulging muscles and a scarred face that makes her heart pound like a pneumatic drill. She also envisions his death in an attack that happens…now.

Locke’s typically ho-hum mission goes sideways when the stunning, green-eyed bubble farmer plants a sensual kiss that sets fire to every one of his remaining man-nerves. He also sees her vision. His own commander is about to kill him.

He needs Via to find out why. First step is to get her to Old Las Vegas without succumbing to a raw, sexual need that burns in him like fever. Getting there will be a snap. Getting out alive—and winning her trust—might be a little tougher. 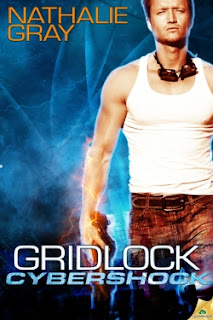 He finds love on the eve of a war he doesn’t plan on surviving.

Dante knows the price of rebellion. The Grid created him in its likeness, turning him into a killing machine—tested, modified and enhanced to be a “better citizen”. Years may have passed since he escaped that freak show, but the scars are still fresh.

Without the mandatory implant, Steel scrapes by, living free of the Grid’s control. When a job goes bad, everyone around her dies, their minds crushed by the notorious Cardinal. But he doesn’t kill her. He takes her to a secret lair filled with fascinating, forbidden pre-Grid knowledge. Who is this man—ruthless murderer or eccentric loner?

Bad-mannered as she is, Dante can’t bring himself to silence the abrasive, cigarette-addicted Steel. Something about her calls to him, though trusting her could be a mistake. Should she betray him, it would wipe out years of patient waiting. Waiting while the Grid hunts him for the priceless information he carries within his living data vault. Waiting while his dish of revenge turns ice cold.

For Dante intends to go back. And this time, he intends to be the only one left standing.

In light of recent hacker activity (Sony, PBS, and other major companies), it seems to me there’s ripe opportunity for even more cyberpunk romances (maybe a contemporary or near future story about a couple who meet and fall in love in the midst of a hacker war?). Lots of intriguing possibilities exist whether the plots are ripped from the headlines or plucked straight from an author’s brain.

If there are other cyberpunk romances out there, I’d love to know about them.