PC Gamer Debate About Romance In Videogames Like MASS EFFECT 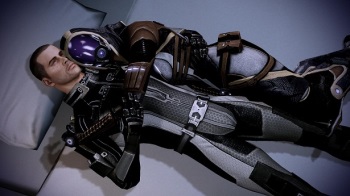 
Tyler: “Alright team, we designed an interesting, complex character, but something’s missing. What’s that you say, every libidinous teenager? Wouldn’t it be neat if players could manipulate the character’s variables with the goal of fulfilling their carnal fantasies? Yes! Instead of a character, we’ll make a doll that comes to bed and says ‘I love you’ when you squeeze it.”

T.J: OK, I’m going to refrain from derailing this whole thing with an anti-neo-Victorian rant on how our society is irrationally afraid of sex, and make my case this way: relationships are a core part of being human, and just about any story about humans. Adding player romance to a game makes it feel more real and complete as an experience. Thinking about it from a gamist “manipulating variables” perspective is missing the point. And it’s kinda gross.

* Are player directed love stories simply an excuse for characters to have sex?

* Does the player-directed aspect render some characters as nothing more than love interests?

* Does current technology lead to awkward and cheesy player-directed romances? In other words, should romances be “writer-dictated” until more sophisticated programming comes along?

As a whole, the debate wasn’t about whether or not romance should be included in a videogame like MASS EFFECT, but rather how best to execute it. Some players can suspend their disbelief even when faced with “clumsy” player-directed romances while others need the mechanics to be invisible in order to engage with the romance.

How cool that gamers are analyzing the issue in such a thoughtful manner! Check out the article and let me know what you think.