Interview With Emma Jane Holloway, Author of A STUDY IN SILKS 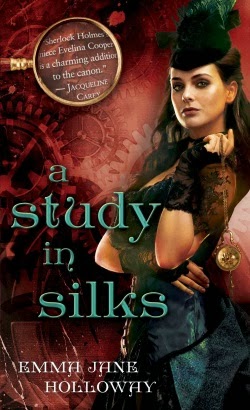 Emma Jane Holloway recently made her debut with A STUDY IN SILKS (Del Rey), part one of a new steampunk romance trilogy. Book two is A STUDY IN DARKNESS (October 2013). The final installment, A STUDY IN ASHES, releases in December 2013. Click here for complete information about the trilogy.

I haven't read it yet, but the author assured me that the romance arc completes in the third book. Based on the research I did, lots of mystery and steampunk elements seem to abound in this trilogy. If you're a fan of Sherlock Holmes, a sweeter heat level, magic, steam barons, and political intrigue, then A STUDY IN SILKS (September 2013, might be up your alley.


Evelina Cooper, the niece of the great Sherlock Holmes, is poised to enjoy her first Season in London’s high society, but there’s a murderer to deal with—not to mention missing automatons, a sorcerer, and a talking mouse . . .

In a Victorian era ruled by a Council of ruthless steam barons, mechanical power is the real monarch, and sorcery the demon enemy of the Empire. Nevertheless, the most coveted weapon is magic that can run machines—something Evelina has secretly mastered. But rather than making her fortune, her special talents could mean death or an eternity as a guest of Her Majesty’s secret laboratories. What’s a polite young lady to do but mind her manners and pray she’s never found out?

But then there’s that murder. As Sherlock Holmes’s niece, Evelina should be able to find the answers, but she has a lot to learn. And the first decision she has to make is whether to trust the handsome, clever rake who makes her breath come faster, or the dashing trick rider who would dare anything for her if she would only just ask . . .

I invited Emma Jane Holloway aboard for an interview so we could learn more about the trilogy!


The Galaxy Express: How did your interest in steampunk evolve?

Emma Jane Holloway: My interest didn’t exactly evolve—I just didn’t have a name to call it. I was writing the series before I heard the term “steampunk” and by then it was more a matter of recognition than anything else. Besides, steampunk is so wonderfully creative and exploratory, it’s impossible not to be pulled in by the sheer energy of the movement.

TGE: Tag A STUDY IN SILK in seven words.

EAJ: Come for the bustles, stay for murder. 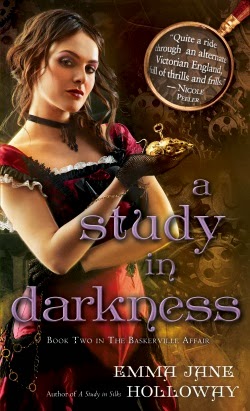 TGE: What was your inspiration for the story?

EAJ: A scene between Evelina and Dr. Watson popped into my head one day. I set it aside—I was busy with other projects at the time—but it kept creeping back like a persistent cat. As time went on, more and more of the story gelled and once I started to write, it poured onto the page. Stories sometimes work like that for me—the subconscious churns away at a book when I’m not actively thinking about it.

TGE: On a scale of 1-10, how would you rate the action-adventure elements in your trilogy?

EAJ: Book one starts off in a fairly genteel fashion—a few murders, an explosion, one measly dragon—but by the end of book three we’re at a twelve. The action keeps cranking up the further on it goes.

TGE: In terms of heat level, what can readers expect?

EAJ: It’s quite modest—there are only one or two bedroom scenes in the whole series.

TGE: The blurb for A STUDY IN SILK promises automatons. What kind? And also, will there be action figures available?

EAJ: The automatons in A STUDY IN SILK are human-sized figures, as well as small clockwork creatures that Evelina creates and brings to life. Bird and Mouse are definitely the comic relief! (Check out the mouse Evelina is holding on the cover of A STUDY IN DARKNESS. It talks.)

Action figures?  Sure, immediately after my movie tie-in deal comes through (just kidding!). And now I’m wondering what a steampunk lunch box would look like. Hmmm.

TGE: The covers for each book in the trilogy are very heroine centric. They inform me Evelina Cooper is a heroine with agency. Do the images accurately represent the stories?

EAJ: Yes, Evelina is a central figure. We follow her journey throughout the Baskerville Affair trilogy, and it’s a pretty wild ride. At the same time, she’s by no means the only important character and I wouldn’t have minded seeing a few of the others represented. What the covers do capture nicely is the increasingly dark tone of the stories. A STUDY IN SILKS begins in high society, but by the end Evelina’s world is caught up in war. 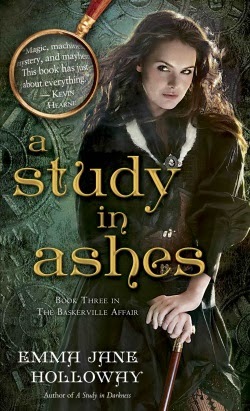 EAJ: Visit my web page. My blog and newsletter are here.
Read the first 50 pages here.
Read the prequel short story and other free reads.
Watch the book trailer.
Like me on Facebook.
Follow me on Twitter @EmmaJHolloway

Ever since childhood, Emma Jane Holloway refused to accept that history was nothing but facts prisoned behind the closed door of time. Why waste a perfectly good playground coloring within the timelines? Accordingly, her novels are filled with whimsical impossibilities and the occasional eye-blinking impertinence—but always in the service of grand adventure.

Struggling between the practical and the artistic—a family tradition, along with ghosts and a belief in the curative powers of shortbread—Emma Jane has a degree in literature and job in finance. She lives in the Pacific Northwest in a house crammed with books, musical instruments, and half-finished sewing projects. In the meantime, she’s published articles, essays, short stories, and enough novels to build a fort for her stuffed hedgehog.

***
Ms. Holloway, thanks for your time, and for your art.
Want to know more? Check out these recent events: