Laurie A. Green's INHERIT THE STARS: FLIGHT is now out! Here's the cover and blurb: 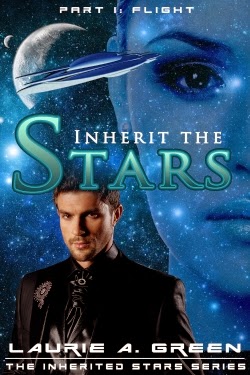 To escape the merciless Ithian Alliance, Sair, a fugitive slave, makes a desperate deal with Drea Mennelsohn, captain of the prototype ship, Specter. But putting his life in the hands of a woman as mysterious as she is beguiling could turn out to be the biggest mistake of his life, especially when the price on his head begins to escalate.

The year is 3500 AD—more or less. No one really keeps track anymore. Since the fall of peacekeeper planet, LaGuardia, two centuries before, much has been lost. Few remember that LaGuardia was once known as Draxis. Fewer still have knowledge that Draxis once guarded a spatial vortex—a crossrip in time and space—and passageway to a legendary world called Earth where the human species originated. Somewhere, hidden in a forgotten archive, is the written history of the known universe and the chronicles of the men and women who helped forge a future in the stars.
And here's a handy roundup of links so you can learn more about her sparkly new series:


And we have lift-off of a brand new SFR series!

Today marks the launch of Part I of INHERIT THE STARS--subtitled FLIGHT--an award-winning novel which was also a former finalist in the RWA Golden Heart Awards(C) under the title P2PC. This opening novel of The Inherited Stars series is being offered in three parts. INHERIT THE STARS PART I: FLIGHT is on sale at a special price of .99!

An Intro to Zjel Shenna: Inherit the Stars Mistress of Mayhem


I want to tell you a little about Zjel--a pivotal character in INHERIT THE STARS who is neither the heroine nor antagonist (per se), but nevertheless plays a major role in the story.

Inherit the Stars: Seeing the Heroine Through the Hero's Eyes


Drea Mennelsohn is the heroine of the upcoming SFR, Inherit the Stars. Since the story is told entirely from the hero, Sair's, POV, she might initially be a bit hard to get to know. After all, everything the reader learns about Drea is filtered through Sair's experience. And Sair owes her a debt--a debt he is forced to accept for the sake of his own survival.

It's a very personal debt he isn't at all keen on paying.