I’m a sci-fi and fantasy nut from way back. I used to devour books, often reading late into the night, or the next morning. As a young girl, I’d never really noticed the gender statistics of the books I read. It wasn’t until much later that I realized how badly represented women are in genre fiction. I’m not referring to the presence of females in the stories, but how they are used.

I was introduced to a new term recently and wonder why I’ve never heard of it before, which is the idea of agency. Generally, it refers to characters having independent, personal action and motivations.


Fewer female characters in sci-fi and fantasy have agency compared to their male counterparts. A woman’s part in a story invariably revolves around a male, whether she is the goal, the inspiration, the thorn, the follower, or a source of melodrama. Often, she is the only woman in her plotline and she rarely has a chance to interact with other females in the story, because her life revolves around the men. Often her weakness is an excess of emotion, or she’s headstrong or childish, or she is strong but secretly, or not so secretly, yearns for a man to dominate her. Things happen to her and she reacts instead of taking proactive action.

Fortunately, as more women enter the field, that is changing and people are more sensitive, or careful about how females are portrayed in fiction. That is not to say that there weren’t strong female characters in the past, but nowhere near as many as men, which isn’t surprising since the stereotypical sci-fi/fantasy readers were boys or young men. But that is changing too.

So, here are my top six list of classic books that had strong female characters that impressed me in the past. 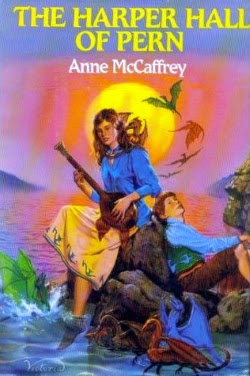 Menolly was one of my first. I loved her spunk, her tenacity, her talent, and she could speak with fire lizards!

I loved how real she felt with her awkwardness and glasses, her defensiveness and insecurity, and because she never realized how wonderful she was.

A kick-ass female military officer. A brilliant leader who commanded the respect of men, and an influential politician. She has agency in spades.

For me, Polgara and Belgarath were the two most interesting characters of the Belgariad and finally, in this book, we get to see this incredible universe from her eyes.

For a series that is so predominantly male, the role of the three Amanda Morgans was an amazing counterpoint to the Donal Graeme - Paul Formain - Hal Mayne trinity, giving a story that already had depth, even greater depth. I loved The Spirit of the Dorsai.

Lastly, but one of my first favorite sci-fi/fantasy series contained an intelligent, somewhat socially awkward scholar who steps into this incredible dark fantasy of nightmare creatures and becomes a warrior. No whimpering female needing to be rescued, Gil Patterson uses her scholarly talents as well as her new-found fighting skills to stand beside the men as an equal.

Many times, in books that have a large cast of characters, the women either get lost to the men who are doing far more interesting things or you wish the writer would focus a little more on what the women were doing. Not so in Barbara Hambly’s books. That’s why she’s one of my favorite authors, not to mention, she’s one damned fine writer. 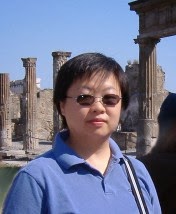 Elizabeth Lang was born in Hong Kong and moved to Canada in the late 60s.

She spent many years in IT, mainly in the insurance industry, and started writing late in life, but once begun, she couldn't stop.

She was an avid reader from an early age. Science Fiction and Fantasy were and still are her passions, with occasional dips in the pools of Mystery.

Her home base is in Toronto, but she has worked in many places around the world. She loves traveling, learning about different cultures, and sampling their delectable foods.

She writes mainly scifi thrillers/psychological dramas, though she did accidentally end up with a scifi romance novel. She swears she has no idea how that happened.

Elizabeth writes some humour, mainly wacky stuff that comes to her mind in the wee hours of the morning when her brain refuses to acknowledge being attached to the rest of her.

She has also dabbled in a bit of poetry, but barely enough to get her toes wet. 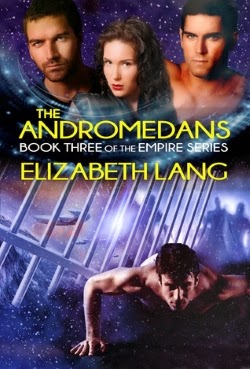 Sometimes you have to lose yourself to find out who you really are.

After being kidnapped by a bounty hunter and getting mixed up with a band of rebels, Adrian and Kali are finally together. They find a quiet corner of the galaxy to live in peace and...who are we kidding...

Just when they think it's safe, the unthinkable happens. Adrian, a brilliant scientist who prides himself on the perfect mind, loses everything. Kali has to revisit something she abhors in order to save him, and this time the stakes are even higher. Not only does Adrian's life hang in the balance but the survival of two galaxies.

Just who are these Andromedans and why are they willing to go to such lengths to destroy humanity? What do they want with Adrian? And who is crazy enough to go to the Andromedan galaxy to rescue him?
Posted by Heather Massey at 8:00 AM
Newer Post Older Post Home