If you’ve been hanging around this blog for any length of time, you know that yours truly has a thing for space pirates—especially space pirate heroines. I’m eagerly anticipating Susan Grant’s forthcoming science fiction romance SUREBLOOD, the next book in her Borderlands series. Why? Because it’s going to feature a space pirate heroine! (Oh, yeah, and the hero’s a pirate, too.) Naturally, such elements imply loads of gritty adventures, space battles, and a fiery romance.

So one would think the cover of such an SFR should entice the reader with all of that excitement, right? I even blogged about which elements would make a really cool cover for this book in Can This Harlequin Cover Be Saved?. Well, if you responded “yes,” then think again. The art & marketing department of romance publisher Harlequin has other plans for SUREBLOOD’s cover.

And hoo boy, you may want to cover your eyes: 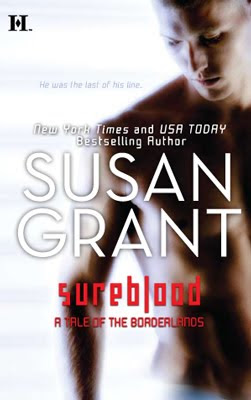 My very first reaction: Whoa, the guy looks like he just stepped out of the shower. This is a clean, professional looking cover…for deodorant/cologne/soap packaging.

In short, this proposed cover for SUREBLOOD is definitely a Cover Fail. It made me wonder what kind of alternate universe did the art and marketing department staffers inhabit. One without space pirate stories? The cover may be professional, but in my opinion, it’s totally bland—especially given the book’s action adventure content. Can you say massive disconnect, boys and girls? I had such high hopes for this cover. Color me disappointed—and mightily frustrated.

Perhaps it’s a sign of these difficult economic times that romance publishers are ratcheting up the man titty/erotic romance campaigns. Seems like in order to capture as many sales as possible, they are attempting to appeal to every single romance reader regardless of individual taste (but all readers swoon for man titty cover? Really?). In the end, they will end up pleasing a number that in my totally biased opinion will fall short of potential.

Sexy and romantic covers? Great, awesome—why not a clinch cover for SUREBLOOD, with a starry background, perhaps? A fiercely accessorized, sexy space heroine with generous cleavage would be a great draw for male readers. Why do historical romances get clear historical visual cues and books like these don’t? Ghettoization of SFR? Yes, in part, along with the corporate mentality that dictates standardization of art.

Is this cover fiasco another indication that romance publishers think their female readers are idiots when it comes to science fiction romance? Maybe Harlequin thinks the stories are both too science fictional and too exotic for readers to enjoy. Gah. I want to believe it’s more of a profit issue, namely, the need for a book cover to have wide appeal.

But clearly, this cover indicates the Harlequin art/marketing department has no faith in the book itself to drive sales, or in the core fan base that would drive the buzz. They simply don’t want readers to know what lieth between the covers. They have your money, so why should they care?

Did you hear the one about DC Comics? Once upon a time, the publishing suits decided that they would commission artists to drum up fetching covers...first. Later, they would then direct the writers to craft a story based (loosely or not) on the cover, which the powers-at-be had deemed worthy enough to attract higher sales. See the cover below from 1977? This one of these, drawn by comics extraordinaire Neal Adams. 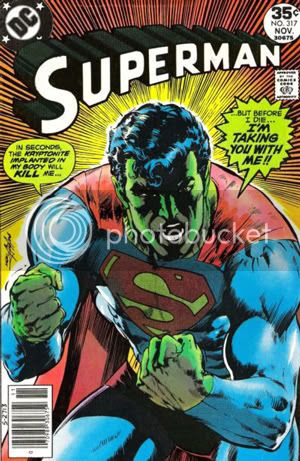 Kryptonite implanted in Superman’s body? He’s going to die but kill somebody first?? Where do I sign up?? It is an eye-catching cover, especially if you’re a 12-year-old boy (the intended audience at the time). But, the story inside doesn’t even come close to measuring up to this dramatic scene. If fact, it hardly even references it. Even those 12-year-olds recognized they had been conned, as seen in some angry letters to the editor a few issues later.

This raises an important question: what exactly are publishers trying to sell to readers? Is just all about the cover? When did the story become such an afterthought? When did it become such an invisible commodity?

Well, they’re miscalculating for sure when it comes to author branding. Take a look at the cover for Susan Grant’s WARLORD’S DAUGHTER, the previous book in her Borderlands series: 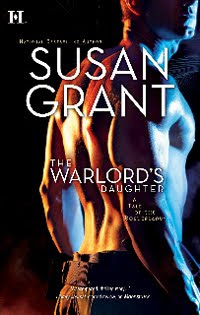 To me, the cover for SUREBLOOD creates a serious disconnect between it and the previous cover. I thought making series covers related was Publishing 101. Or maybe I missed the memo, the one that declared, Sell Readers On The Current Cover Trend Like It’s Going Out Of Style.

Seeing the proposed cover of SUREBLOOD made me recall author Jess Granger’s observation that she shared in the discussion following Can This Harlequin Cover Be Saved?: “SFR does need its own "cover code."” To me, this translates to covers that balance the science fiction and romance elements—or at least placing one SF element in the dang image!

Publishers have to keep taking risks. It’s part of the business. Not a fun one, I’m sure, but this is art we’re talking about, and you can only commercialize it so far before readers start standing in revolt.

What do you think about the proposed cover for SUREBLOOD? Is it the type of cover you’ve come to expect for an SFR story? Would this cover compel you to part with your hard earned cash (or dig into your savings) without knowing anything else about the story?

Share your observations here, or contact Harlequin with your feedback by sending an email to customer_ecare “at” harlequin.ca